The long sandy beaches of the Pacific Northwest go on for miles and miles, great curves of sand that reach from horizon to horizon. Up where the sands meet the dunes are the drift trees, great logs that have floated down from the wild mountain rivers, into the sea, where they're thrown on to the beaches by the winter waves.

Walk along them, and you find smooth pebbles, worn down in the angry waves of a hundred thousand winters. Down in Oregon the sands are golden brown, while up north in Washington the volcanic beaches shine black ink in the morning sun. It's on the sands you'll find them, the grey-white saucers. They've landed from the sandy ocean floors, the skeletal remains of bottom dwelling echidnoderms: sand dollars.

The tube feet are lost, and they rest there, empty, waiting to be smashed by the next angry wave, broken into the small change of the beaches. 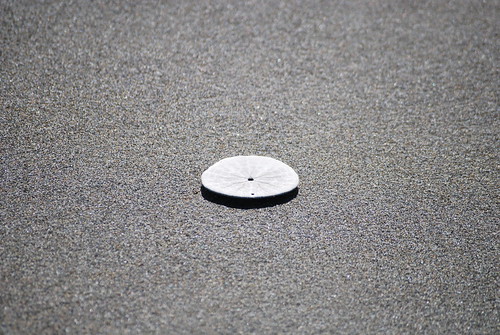 There we were, driving drown a back road somewhere on the Oregon coast. We'd just been photographing lighthouses, and were taking in the evening light through fresh green leaves. Suddenly I saw something wander into the road in front of the car, and I stopped to let it cross safely.

It was a big animal, glistening black with slicked back wet fur. A round rodent face briefly looked at us, and it strolled across the tarmac, a wide leathery tail leaving a trail across the dry road. It was a beaver, taking a short cut between two ponds. We'd never seen one before, and I was amazed at just how large it was - the legs may have been short, but its body was as big as a large dog.

We reached for a camera, but it quickly vanished into some reeds.

A brief encounter with the wild.