There are classic views out there, views you'll see again and again on the covers of travel brochures and in travel magazines. You've probably seen them yourself: Wyrms Head from Rhossili, Mount Rainier over the Seattle Skyline, Grand Canyon from Mather Point, the White Cliffs over Dover.

One of those views is the view from US-191 as it climbs away from Monument Valley, heading towards Mexican Hat. We pulled over at the top of the rise, and waited for a gap in the traffic to leap out into the centre of the highway* and take our versions of the iconic image.

marypcb had been taking photographs in black-and-white using her pocket camera, and I'd been doing the same to mix and match with colour images from my DSLR. And, hey, there's something about the American west that brings out the wannabe Ansel Adams in all of us...

This time I rather think it worked.

The towering buttes and mesas are small in the distance, the road running off into the heart of the natural beauty. Overhead the winter clouds threaten more snow to whiten the red red desert. 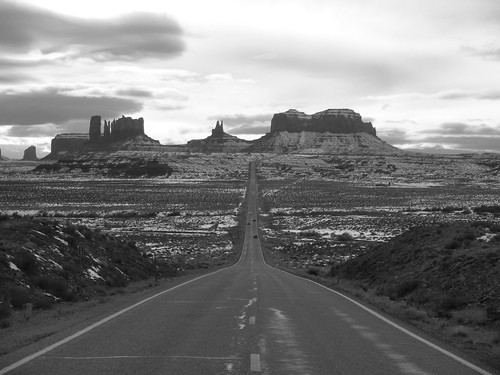 *Not that there's much traffic to worry about in the dead of winter - and with a long straight to the Monuments, and another on the other side of the rise, there was plenty of warning of oncoming SUVs and RVs...

Well there's no need to worry - we've done the detective work for you and there will only be two versions on sale through retail channels - one for home users, one for businesses.

Here's the scoop over at our IT Pro blog:

There are going to be six -well, really five, actually three, but you'll only see two - editions of Windows 7 (not counting any special bits-left-out-please-the-lawyers N or K versions for the EU and Korea). While there’d been something of a campaign for just one SKU, like OS X, Microsoft’s multi-version release isn’t going to make much of a difference to you.

A fascinating news piece from the BBC reveals Titanoboa, a 13m long snake:

The discovery of fossilised remains belonging to the world's largest snake has been reported in Nature journal.

Titanoboa was 13m (42ft) long - about the size of a London bus - and lived in the rainforest of north-east Colombia 58-60 million years ago.

The snake was so wide it would have reached up to a person's hips, say researchers, and was estimated to have weighed more than a tonne.

Researchers discovered fossilised bones belonging to the super-sized slitherers and their possible prey at Cerrejon, one of the world's largest open-pit coal mines. The animal is a relative of modern boa constrictors.

I suspect this may be the equally large boa of myth and mayhem.

Or is this it? 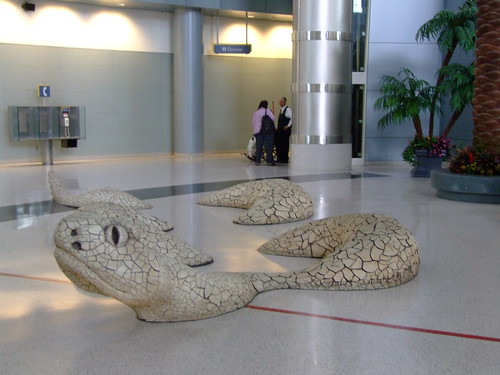