...as the rest of it has been a mix of upgrading the lounge PC ("Media Center needs memory badly"), worrying about the abscess on the Jeffster's leg (he's been to the vet, so it's a just a matter of waiting for the antibiotics to work), finishing a 4.5K word piece for IT Expert, conducting an interview about software development tools via Skype to Santa Cruz (with a brief digression into the subject of ice cream), and working on the outline for a piece of commercial writing...

I was hoping to write a piece on the latest volume of Ian Douglas' fascinating wide screen space opera series that mashes military SF with Arthur C. Clarke-style deep history speculation, early Gregory Benford xeno-archaeology and a touch of Greg Egan mathematics, but ran out of time. That's a project for another day...

Instead here's Calli lazing in a window on a hot, bright sunny day. 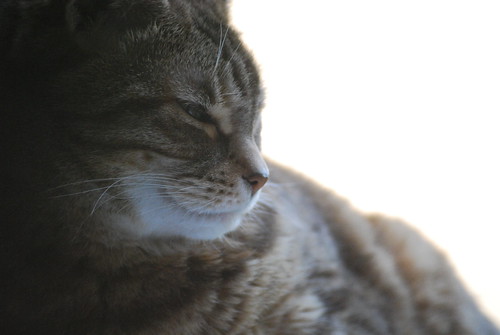