I've been following an interesting chain of posts about the possibility of a Vingean Singularity across several sites, which culminates in this interesting comment from

Jo's comment that sparked this was: I don't think we'll ever get to the point where understanding the future would be like explaining Worldcon [i.e., the world science fiction annual convention] to a goldfish...

I'm less convinced partly because I've sat back and looked critically at my morning.  This morning I've had 3 conference calls, dozens of "conversations" in text in a variety of IM clients which clutter this nice new screen, sent some test messages and been involved in some email threads.  I would have trouble explaining to my mother, born 1931, that that was actually work.  I don't think this is going to get any better either.

This fits in with a long running conversation I've been having with several people (including the esteemed Mr Vinge), in which the point has been made that the human race has survived many singularities - from the agricultural revolution to global air travel.

It's an issue I think that's actually been widely accepted by society at large. After all, it's part of our comedy background noise already. There's a skit by, ISTR, Mitchell and Webb, where a stone chipper and a tool binder meet a technology evangelist for bronze. The characters find it hard to conceive of anything other than stone and hide, until one makes the conceptual leap to realise that he'll still be binding axe heads onto handles, while the stone chipper will be left behind to starve...

marypcb and I use that could easily be called "The Doorbell Singularity", and it's an interesting example of how quickly perceptual and societal changes ripple through the world. it's shaped by a simple question:

"What finger do you ring a doorbell with?"

If you're under seventeen (and living in the developed world), you'll probably say "My thumb". It turns out that the widespread use of texting and video games is shifting the pointing and pressing finger from the index finger to the thumb. What's also more surprising is that the change is rippling up the age spectrum at a rate of about two years every eighteen months. A thumb user can't conceive that the index finger is anything other than one used for typing on a keyboard.

Now that's a singularity, and it's catching up with the rest of us very fast indeed... 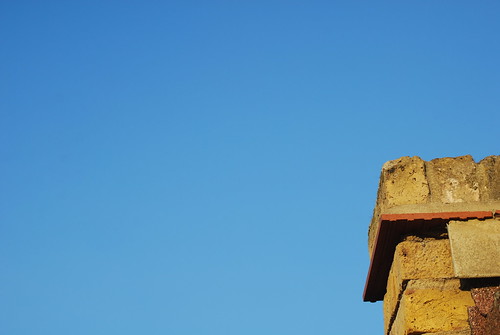 Taking a break for handling the house server migration, I wandered up to the roof for a brief taste of evening sunlight. The sky was clear and bright, and the London brick of the houses shone red and yellow in the bright light of an English summer...