Nothing (at least techwise) gets more heated more quickly than a discussion about mobile phones - especially about smartphones. I've been thinking about this, and tying it in with some other thoughts and discussions I've been having on the smartphone as a tool for defining user context. The result is a possible reason why people rushed to sign up for iPhone upgrades yesterday, and why so many people felt let down and disappointed by O2's online store.

So why do people get so attached to their smartphones? The answer's quite simple. The smartphone is the first truly personal computer. PCs have claimed to be personal, and they certainly offer many of the features we want, but as they're tethered to a desk or a lap, they're not there with us all the time. Smartphones have become personally ubiquitous. They're with us from the moment we wake up (in a recent study a significant proportion of Blackberry users noted that they used their phones as alarm clocks), to the moment we go to sleep. They know where we are, they know what we're doing. They help us communicate with the people who matter to us, and they help us fend off those we don't want around. We use them to find out where we want to be, and to find out where other people are. In short, they've rapidly become an extension of who and what we are.

Do you get a twinge every time you lend a phone to a friend - or even a partner? You're handing over something much more personal and much more intimate than a diary, so it's no wonder you feel a strong attachment to a hunk of plastic and electronics.

But underneath it all we're not satisfied. Our smartphones have become so useful, so entwined with our lives, that we see every flaw, every minor bug as a strike against the device. Each of us has that perfect phone in our heads - the device that is so in tune with who we are and what we want that it becomes a seamless extension of our lives. And when our current phone fails to match up to that platonic ideal, we become disillusioned, even though we defend the device to all comers. We want our phone to be that ideal, and we want the people around us to believe that it is, that we've made the right choice. We forget that all phones are compromises, where the technology and the dreams of the designers are brought together in a device that will meet most of the needs of most of the people. It's the old 80/20 rule at work - but unfortunately that 20% will always include something that matters to someone.

Even so, at the end of that year or eighteen months with the phone we rush to the online shops and review sites and try to find the next smartphone to make part of our lives. We read the promises of the manufacturers and we plunge in to another intimate relationship. After all, this could be it, this could be the one true device that will mesh with everything you are and you want. We want to believe, as we want that personal ideal. That's why the iPhone upgrade mess yesterday was so important to so many people - there was already an emotional attachment to the ideal the iPhone 3G had become. When O2 was unable to deliver on its promises, people felt rejected and unwanted - as the object of their desires was now unavailable and distant. Taunted with a glimpse of the ideal they were thrown out Eden and left looking at the angel with the sword in the new found shape of a sold out notice on a web page.

I'm a mobile device agnostic. I have to be, as I write about them as part of my life. As a result I tend to carry two or three different devices at any one time. At the moment that's a one of the latest Blackberry Pearls, a first generation iPhone, and a HTC Kaiser running Windows Mobile 6.1 - though I can quickly get my hands on a handful of other devices with different operating systems and different form factors. They're all very different devices, all very different ways of working with personal information. Some work well as Internet browsing devices, some as messaging tools, and some as all-purpose computing platforms that you can fill with software you choose. What's interesting is that none of the design decisions made by the device developers are wrong - they all stem from different assumptions of what the end user wants. The choices that have been made follow logically from those initial assumptions. That's why there's no one-size-fits-all device out there, and why there's always going to be something better, something that scratches that itch that only you have.

Maybe you're a Blackberry user, or Symbian, or Windows Mobile, or iPhone. To be honest it doesn't really matter. What really matters is that you've got a device that works for you. There's no point in evangelising it to everyone around you - and even less point in denigrating someone else's choice. The device in your pocket or in your bag can only matter to you, as it's now part of your life. It's what works for you now - and it may not work for you tomorrow. The compromises you've made with the designers' compromises can only last so long, and soon enough you'll be looking for something new, for a new device to blend into your life.

After all, the one true smartphone (for you) has to be out there somewhere... 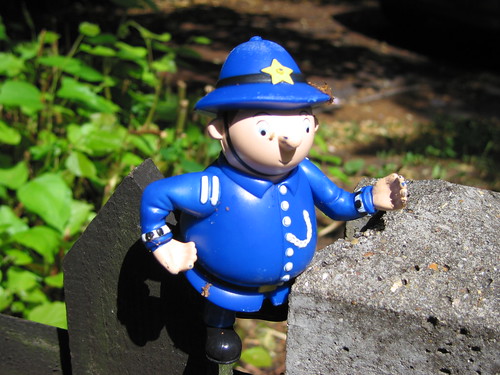 Carrying a camera at all times is slowly becoming a habit. Remembering to take pictures of the neat things we see as we walk the familiar road to the Tube is something that's harder to do. Today we found a child's plastic policeman perched in the interstices of a fence. An ant was slowly crawling up its face, trying to find some food on the impermeable plastic bobby.

It was gone when we came home later in the afternoon.