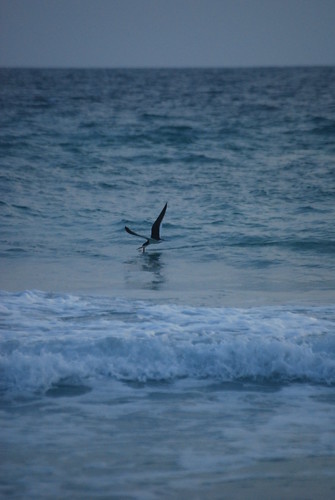 WES this year was, as always, excellent. We got access to many of the people we wanted to talk to, including sessions with the co-CEOs of RIM, talking about the future of Blackberry and the role of the smartphone in a connected contextual world. It's left me with a lot to think about and the inklings of a thesis I want to explore in articles and blog entries over the next few months.

WES, also, was self-contained, and we didn't leave the air-conditioned halls of the combined hotel and conference centre from the moment we arrived (escaping the dodgy taxi driver who stiffed us $30 while accusing us of under-paying) to the point nearly four days later where I had to go ask the folk at the rental car agency just how to release the parking brake on the mini-van they'd just upgraded us to (there's a lever above the foot pedal for the parking brake that releases it)...

So we drove west, across the narrow peninsula, to one of my favourite coastlines, the white soft beaches and azure seas of the sand keys of Florida's Gulf Coast.

Currently we're on Anna Maria Island, where I spent a pleasant sunset chatting to a local photographer and twitcher about the various sea birds that made their way along the beaches. Coal-black frigate birds drifted effortlessly overhead on long thin wings, while brown pelicans bobbed their way up and down, alternately skimming the waves and soaring.

The stars of the show were the skimmers, with their strange asymmetric beaks - the lower portion much longer than the upper - and their striking black and white plumage. It was when the beaks hit the water that you could see why they were shaped the way they were. Open-mouthed the skimmers shot across the surface of the waves, leaving a wake as they aimed to catch fish swimming just below the surface.

Alone they were impressive, in formation they were amazing. Banking sharply they wove around each other, all the while skimming the waves. 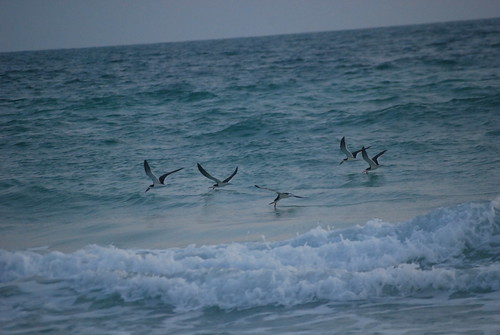 If you're ever in Florida, this part of the Gulf Coast is well worth the two hour drive from the tourist hotspots of Orlando. 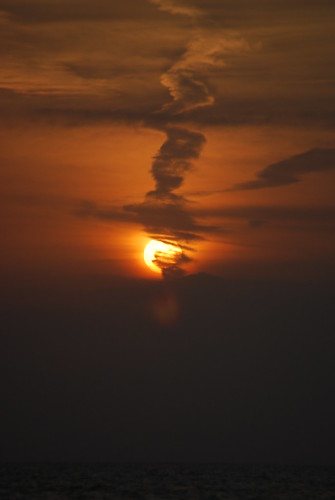 Sunset over the Gulf of Mexico