I've been using digital cameras for nearly 10 years now, and it's hard to remember the hassles of buying film and sending it off to be developed. I do remember trying to find the "Kodak moment", as I husbanded my way through the meagre 36 shot roll of 35 mm film in my OM 10.

Saturday afternoon we were on the Californian coast, in the little fishing village of Moss Landing, one of my favourite photography locations (and the fact that you can get a decent fish supper there doesn't hurt!). There were three sea otters in the harbour, one feeding by breaking mussels on a stone. Then there was the sea lion stunting with the surfers on the beach, in amongst the spectacular breakers. And after dinner the sky lit up with a spectacular sunset.

The grand total for the day? 292 images. That's the equivalent of more than 8 rolls of film in three or so hours. I hate to think what the processing would have cost! Now all I have to do is stick the 8GB SDHC card in my laptop, and the images are ready for me to edit and upload.

A fun few hours, and I got my halibut too...

As we were driving over the short causeway into Moss Landing,

marypcb spotted a sea otter in the harbour. I pulled in at the side of the road to see three large otters basking in the early evening sun. Moss Landing is a good place to see sea otters close up, as it's where the Monterey Bay Aquarium releases otters into the wild after they've received vetinary attention. It's also the home of a couple of large rafts of otters, which use the calm of the harbour and a nearby slough to shelter from wild seas. 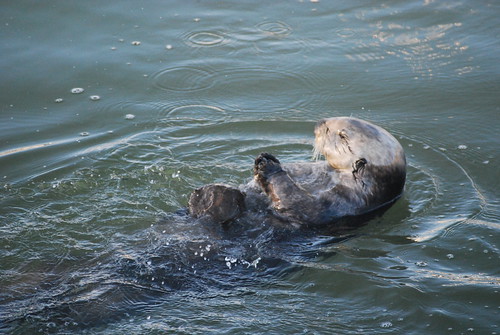 Suddenly one dived down, and came up with a pawful of mussels. It couldn't get into all of them, so it dived again, bringing up a stone which it carried on its stomach. In a flurry of water it began to break the shellfish open on the stone, quickly (and noisily) slurping at the opened flesh. We stood there for a while, just watching it feed. 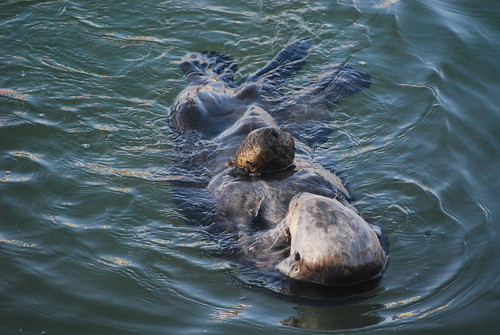 The otter would dive for more shells, holding the stone close to its chest as it dived, ready to use for the next batch of mussels. Down, up, crunch, bang, slurp. Occasionally it would tangle in some floating weed, ignoring the encumbrance as it concentrated on feeding. 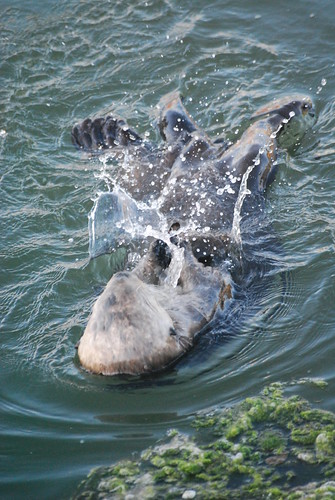 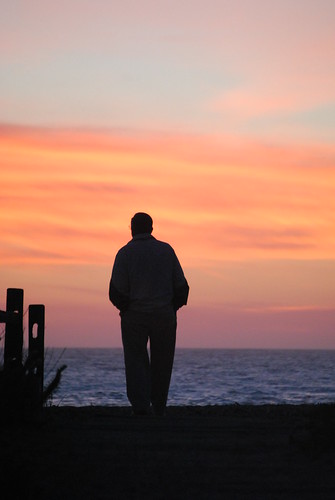 Sunset over the dunes at Moss Landing.

The sky was an amazing colour, and as I walked up the dunes to take some photographs of the clouds, I saw a man on the path ahead of me. He stood, silhouetted against the orange sky, and I couldn't resist taking just one shot...
Collapse