Thanks to the joy of Bitorrents, the pilot of "Studio 60 On The Sunset Strip".

Oh yes, it's good. Sorkin snappiness, Felicity Huffman in Dana mode, and the best denunciation of network television yet, as Jud Hirsch's character melts down in front of the cameras.

You should change the channel right now, or better yet turn off the TV.

No, I know it seems like this is supposed to be funny, but tomorrow you're gonna find out it wasn't and I'll have been fired by then. This isn't supposed--this isn't a sketch.

This show used to be cutting edge political and social satire, but it's gotten lobotomized by a candy-ass broadcast network hell-bent on doing nothing that might challenge their audience.

We were about to do a sketch you've already seen 500 times. Yes, no one's gonna confuse George Bush with George Plimpton, we get it. We're all being lobotomized by the country's most influential industry which has thrown in the towel on any endeavor that does not include the courting of 12-year-old boys.

And not event the smart 12-year-olds, the stupid ones, the idiots, of which there are plenty thanks in no small part to this network. So change the channel, turn off the TV. Do it right now.

...We're eating works for money, "Who Wants to Screw My Sister", guys are getting killed in a war that's got theme music and a logo. That remote in your hand is a crack pipe...

..and it's not even good pornography. They're just this side of snuff films, and friends, that's what's next 'cause that's all that's left.

These are the people they're afraid of, this prissy, feckless, off-the-charts greed-filled whorehouse of a network you're watching. This thoroughly unpatriotic--

You can find an early version of the script here.

A while back I mentioned my shiny new Belkin F1DH102U Dual Head KVM.

After a day or so using it, I discovered that it really couldn't cope with UK keyboards directly - quite hard when writing about C# and the # key doesn't work. I suspect this is down to it capturing and scanning key codes to handle the keyboard shortcuts for device switching.

I could switch to a US layout, but that's not really much good. However, after a little experimentation I discovered that you could put a USB keyboard in one of its standard USB ports, and it would work just fine - in fact you could go back to using application launch buttons and media controls (and in the case of my keyboard of choice, the scroll wheel and copy and paste buttons). There was just one problem. The KVM complained most vociferously that it didn't have a keyboard where it was expecting one. The incessant bleep was rather annoying, and meant I had to find another solution...

Luckily Belkin has some firmware that removes the keyboard detection functions from its KVMs, so I downloaded it from the Belkin site, and set about reflashing the KVM.

This is where this turns into a cautionary tale. I didn't realise there was a problem with my PC's printer port (I still struggle on with a motherboard that I really should have replaced after the PSU went "bang" last year), and a failed firmware transfer bricked the device. Ooops. It was working on one PC, but I couldn't switch to the other. The button didn't work. At least it wasn't going bleep every few seconds.

More awkwardly, Belkin didn't seem to make the default firmware available, so I wasn't able to return it to its default state. I decided to put things aside for a couple of days, and got on with writing. After all, it was deadline crunch week.

When things quietened down, I went back to the problem. I wondered if the Belkin software contained both versions of the software. It seemed bigger than it should be - but there was no documentation one way or the other on the Belkin site.

In a spirit of scientific enquiry, I hooked the KVM up to

marypcb's PC, and reflashed it. After I power cycled it, it sat there going bleep. The buttons seemed to work, too! I quickly hooked it up to my rig, and yes, everything was back to normal.

I then hooked it back up to

marypcb's PC, and flashed it again. No bleep, and the buttons worked. I hooked things back up, and everything was working just the way I hoped. It even coped with multiplexed USB devices (so I've got a USB port free that I can share between my PCs. I suspect I shall hook the web cam into it).

A lesson or two learned.

Oh, and Belkin? Please update your documentation to note that the flash software contains both the original and new software, and will happily restore the device to the default configuration if there are any problems with a firmware update. Thanks.

Why are pirates called pirates?

No one knows. They just ARRRR!

Here are a pile of photos of Sony filming a new commercial in Glasgow. Paint bombs everywhere!

Start here and then move on through the photos.... 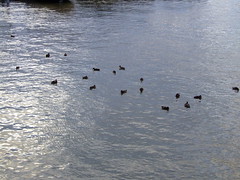 Duck Matrix Display
Originally uploaded by sbisson.
An array of ducks on the Thames. What are they spelling?

Is there some sort of Drake Vinci code at play here?

There's certainly an "O" in the middle...