In this twist on the familiar tale, a 419 scammer ends up carving Creature Comforts characters and a Commodore 64 for the man he planned to scam - and sent them to the UK!

More "conversations" with the scammers here.

I've been a little frustrated with Nvidia recently. They regularly update the drivers for their desktop graphics cards, but tend to leave out the laptops - even when the're running the same hardware!

Time to let go of the frustration, as you can take your laptop to the video driver ball in new glad rags. While trying to get more up to date Vista drivers for my tablet, now that I'm running the latest post Beta 2 build, I came across LaptopVideo2Go.com, a site that produces modified .INF files for Nvidia's stock drivers, so they run on laptops. All you need to download are their modified installer descriptions, use them to replace the Nvidia description file, and run the installer...

Just a pity that the modified .INF file for 88.61 for my tablet didn't support screen rotation. Ah well, back to the old versions. 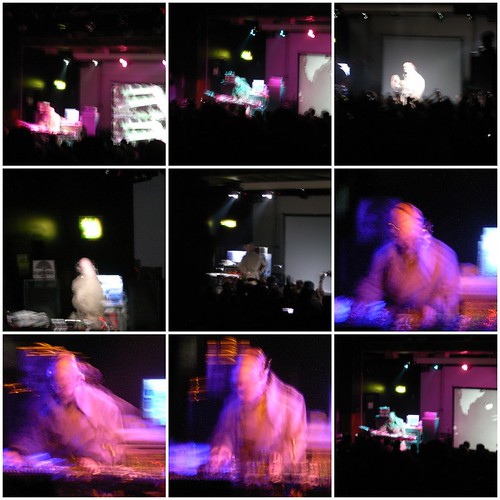 Little camera at the back of the hall - what else do you expect!

Last Friday Thomas Dolby played another small gig at the Scala in London. Like the earlier concert

marypcb and I saw back in March in San Francisco it was an intimate event, with a lot of interaction with the audience. TMDR is obviously playing because he wants to, not because he has to...

And last Friday night he was coming home...

The set started out with a system reboot a few chords into Leipzig, so TMDR gave a short talk about his life, his music, and why he was playing again. Then on with the songs. Leipzig was followed by One Of Our Submarines. The video rig that was being tried out in SF had matured over the tour, and I Live in A Suitcase and Flying North, two of my favourite travel songs, showed off the mix of live images and video clips.

Much like the video clip from TED he blogged a few months ago, The Flat Earth showed how he used his collection of equipment to build up songs from snippets of sounds. Windpower introduced a little experimentation, that led on from some of the work on his studio last album, The Gate To The Minds Eye, turning data from the SOHO satellite into sounds to build a new introduction to a familiar song. Europa and The Pirate Twins was a blast (as always), and we were in the home straight with a ride through Hyperactive, She Blinded Me With Science, and a complete reworking of the George Clinton collaboration Hot Sauce.

The show ended with a final blast of Airhead. Unfortunately the Scala's early curfew brought things to an end too quickly, though we did get nearly two hours of prime Dolby.

It's been a blast seeing TMDR twice this year. Well worth the 23 (or is it 24?) year wait, from those Saturday afternoons with an early interview and session on the Stereo Sequence, and then finding a cassette of The Golden Age Of Wireless.

Yes, I have ordered the T-shirt. Both of them!

One thing missing from Skype is the ability to record calls.

As a journalist, I often need to make recordings of phone interviews - and getting them on my PC in digital format makes it easier to transcribe interviews (and hopefully soon, to search them). I have a small Sony recorder, but that uses a proprietary variant of ATRAC, and you need their software. It'll plug into a phone line, with a bit of kit from Maplin, but the recording quality, err, sucks. This device from Olympus looks good for the future, but I need something now!

Luckily, while doing some research for my Office column, I came across an Outlook plug-in called Skylook that not only integrates your Outlook address book with your Skype address book, so you can call people using Skype Out or Skype-to-Skype, but also records conversations as MP3s, ready for archiving and editing. There's even a built-in answerphone that adds calls to an Outlook folder. Microsoft may have made a splash earlier in the week with their unified messaging announcements, but Skylook's there already. Tie it in with the Skype-Salesforce.com integration and you've got a very interesting set of CRM tools...

The recording quality is good, and the size of the resulting MP3 isn't too bad either. Skylook's a rather useful piece of code. Businesses can use the recordings as part of any compliance procedure, while the rest of us can quickly turn them into podcasts (or should that be "skypecasts"?).

There's a 14 day trial, and the final registration cost isn't too bad either. A nice bit of code from our Aussie cousins...
Collapse