This isn't Putney any more, Toto. Not when two chaps in orange wigs shoot past on go-carts, and there's a giant bicycle with footballs for wheels propped up against a lamp post. That and there are lions in football strips all over the place. I suspect they ate the Cow Parade.

Today I am in Munich, for a set of VoIP briefings. As the company I'm talking to has provided the IT infrastructure for the World Cup, this morning I was scanned, security checked, covered in passes, and let into the bowels of the Munich's old airport. Now a conference centre, it's the nerve centre for the broadcast and IT infrastructure that's linking all the stadiums and training grounds. A fascinating place, full of little wooden buildings and cabling, it's going to make cracking copy for my monthly messaging column.

The rest of the day, well, it's been PowerPoint.

Tomorrow I seem to be going to see some football match here in Munich. It'll actually be the first game I'll have ever seen. 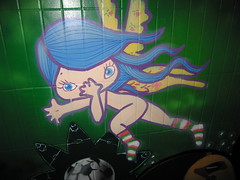 Part of a piece of underpass art commemorating the 2006 FIFA World Cup in Germany.

I really think she needs to be someone's user icon
Collapse