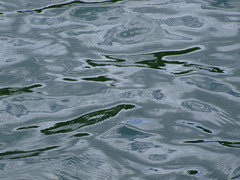 Ripples
Originally uploaded by sbisson.
Lake Washington in the spring sun, from a lovely little lakeside park in Bellevue.

I loved the way the light on the water was its own Photoshop posterisation... 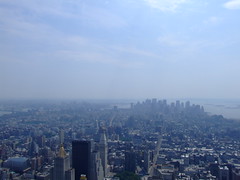 The City
Originally uploaded by sbisson.
Looking south from the Empire State Building on a hot and hazy Memorial Day...

I can't remember who originally pointed me at Donna Andrew's Meg Langslow novels, but thanks to sleeping in

saffronrose's spare room on a couple of recent US trips, and a convenient late night Borders in Puyallup, I've now managed to read nearly all of them (apart from the first, Murder with Peacocks). What I find most interesting is that they're well targeted at a niche marketplace, with the mysteries being built around typical geek hobbies. Meg Langslow, the sleuth in question, is a blacksmith who over the series begins to specialise in nicely sharp swords...

Murder with Puffins, the weakest of the books I've read, is set around birdwatching on a small Atlantic island (something I'm quite familiar with, coming from a small Atlantic island). Things get a lot better with Revenge Of The Wrought Iron Flamingos which brings death to the stage of a re-enactment event, while Crouching Buzzard, Leaping Loon delves into the dark heart of a computer games development company (with a side dose of role-playing). Perhaps the most fannish, We'll Always Have Parrots, is possibly the best depiction of a convention since Diana Wynne Jones recreated the Adelphi in Deep Secrets (and it also features an amusing pastiche of Xena, Warrior Princess). The latest in paperback, Owl's Well That Ends Well, takes us to an enormous yard sale, with a dose of interior design - and the snippet of the next volume, No Nest For The Wicket sets us up for death on the (literal) field of a game of Extreme Croquet.

idont.com. No actual linkage, because it's a really crass marketing campaign for a certain flash memory manufacturer that tries to look like underground art (I first saw it as a fake graffito on the tube).

Avoid. The website's all Flash, anyway.

Still, I quite liked the image. Pity the marketing pissed me off.
Collapse